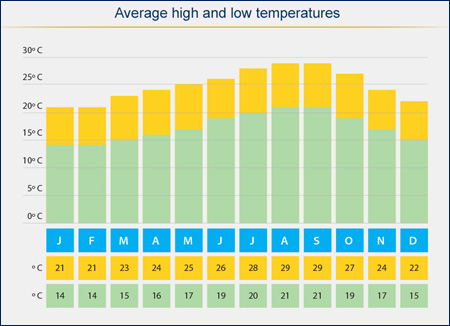 The Canaries form an archipelago of seven main islands, situated in about latitude 28°N, some 100 km/60 miles off the coast of North Africa.  The Island of Lanzarote is the most easterly of the Canary Islands, 60km long and 20 km wide, making it the fourth largest island in the Canaries.

Lanzarote enjoys a mild dry climate with average daytime temperatures ranging from about 21°C in January to 29°C in August. Annual rainfall is just 140mm (5.5 inches). This makes Lanzarote the perfect year-round destination.

The waters of the Atlantic Ocean here are tempered by the Canaries current, hence summer temperatures rarely rise very high, whilst winters are extremely mild.  The ambient air temperature is tempered by the trade winds and you should be particularly careful not to be deceived by the fact that the sun is very powerful all year round.

The warmest days in summer occur when hot, dry air is drawn out from the Sahara desert and reaches as far as the islands. This air may sometimes be laden with fine dust particles blown from the desert. However, it reaches the islands with a raised relative humidity and lower temperatures after its passage across the cool ocean water.

The weather may be disturbed for a few days at a time in winter under the influence of an Atlantic depression, but such stormy and wet periods are not frequent. Some fog and cloud may occur in the summer months, which are usually dry and sunny with no very hot days.

The northern shores of the islands, being more exposed to the predominant northeast trade winds, are rather wetter than the sheltered southern coasts. Daily sunshine hours range from an average of six in winter to as many as eleven in the summer months. 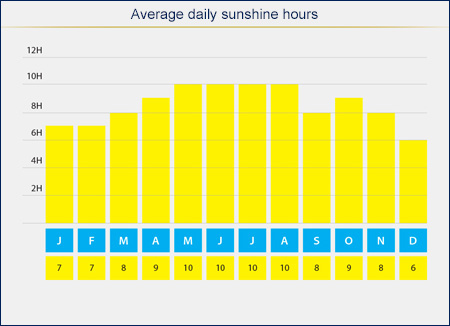 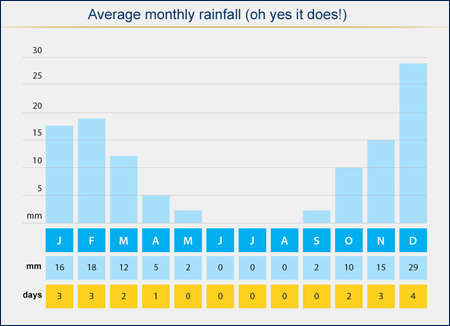